The Arunga/Hellon story just won’t go away courtesy of our bold, authoritative i-know-what-you-did-last-summer media and  of course, yours truly. So we keep talking about it, in the elevator, on the jav, and over coffee in Java. Yet, we still have questions : Why is she doing this? Does she have a mental disorder? How could she sue her parents? What is that cult church all about? As usual, I have no answers either. But I can draw parallels; learned how to in math class, somewhere along my formal education. But I digress.

What I’m I saying? I think I can identify with this whole real life drama by drawing similarities from the HBO Television drama, True Blood.

Just to break it down for you, in case you haven’t watched the series.

So like True Blood is set like in a fictional town in Louisiana called Bon Temps and there are like these vampires that live there and they’re like actually friendly and co-exist pretty well with the human population unless they’re like provoked and all. Somewhere along the story line, people like start getting murdered and like some of the bodies are found without organs and then in like all this, there’s like this crazy woman who like wants to have ultimate power like God and she like feeds on human hearts and turns into a beast at night and she like brainwashes some poor black girl into joining her ‘religion’ and shit and this girl starts living with the crazy woman and some random guy who the that girl like falls in love with and this woman has like parties at her place and guys like drink lots of booze and they have like orgies and stuff and as the party continues in the night they start acting like zombies and have like this large scary pupils in their eyes and they chant like some evil stuff and scream and have sex on the lawn and like it’s just crazy. You dig? No?

Bon Temps, Nairobi: Where everything is going down – questionable religious organizations and activities that border between the strange and the frightening supernatural: the perfect location for drama with the right population to rule.  There, the  future president and his running mate have code names that the entire population can relate to: Vedetis Supanova and Crab Nebula. 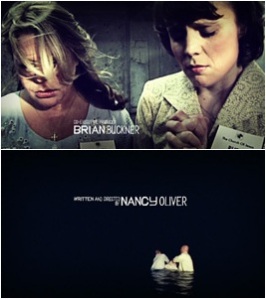 Enter Maryanne Hellon Veditis Supanova Forester: Maryanne plays a Maenad. (In Greek mythology, a Maenad is a creature that requires offerings or tributes from other supernatural creatures who serve alcohol. If they’re not properly honored they tend to get angry and cause madness in people whether supernatural or human. True story.).

The thing to note about Maryanne is that she’s very liberal, never lives within the rules, and has no sorrow, guilt or remorse. She’s very vocal, speaks her mind and is extremely wealthy. She worships Dyonisus, (another figure from Greek mythology said to have converted women to madness with ecstatic revelry and wine. The goal of this activity was not promiscuity and drunkenness, but rather insight and prophesies.You need to Google this shit to believe it.)

Maryanne is very popular in Bon Temps for her rocking parties with lots of alcohol and music. However, these parties are just a front to get the Bon Temps population to join her cult like activities. Oh, she even gets her cronies to feed on a human heart.

“Our church is not against the consumption of alcohol! Get it?!” 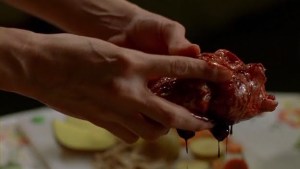 “This is not a placenta!! What is wrong with you people? Don’t you know your Biology?”

Then Tara Esther Crab Nebula goes to live with Maryanne: Tara is a 26 year old pretty girl who after meeting Maryanne is less interested in her well paying job and her mother’s wellbeing. At first sight, she looks like she’s really got it together, but wait until she has a tantrum and she’ll tell you what’s on her mind. She can’t stand ‘stupid people’ and has developed a tough exterior in the course of her life. However, below that hard surface is an insecure child who wants the best life has to offer but thinks she’s undeserving. You will remember Tara for slapping her mother on the face and calling her a bitch, though she loves her very much.

Eggs, is so HOT!!!!! He doesn’t do anything really, but he is so damn HOT!!  Tara meets Eggs when she quits her job to go live with Maryanne and Eggs in Maryanne’s mansion. The thing to note about Eggs is that he has no recollection of his childhood hence, there’s no background information of who he is or where he came from. He also doesn’t seem to care whether he has a job or not. Maryanne takes care of him, anyway. Eye candy here is also an excellent guitar player. Like really, really good.

“This is the good life baby!! Married, happy and jobless.”

But who is Jason Malaba Stackhouse? This chiseled bodied, Don Juan is quite the character and the ladies can’t get enough of him. Like Tara, who used to love him very much btw, he is also searching for his purpose on earth.  Jason doesn’t follow Tara into Maryanne’s cult. Instead he joins Fellowship of the Sun Church, a religious movement that secretly arms itself to eliminate all the vampires living in Bon Temps. He however snaps out of the fake training camp and together with his pal Sam, uses the skills he’s learned at FSC to save the entire town, including Tara, from Maryanne’s hypnotic faith.

And Lafayette Jeff Koinange Reynolds thought he could help too: Lafayette is Tara’s media cousin. Seeing how immersed Tara is in Maryanne’s cult, he tries to sober her up even attempting to Kidnap her for 24minutes. But Tara isn’t taking none of that are-you-crazy vibe.

Yup! He’s gay, but his sense of humor makes up for the loss.

“Bitch sit your ass on the floor! You too screwed up for the bench.”

Then We the People, Sookie Stackhouse and Bill Compton start getting really conerned: Sookie and Bill are the perfect example of the contemporary Kenyan couple. Good girl meets really old vampire looking guy with big house and unrivaled sexual appetite.  They only go out at when the sun sets when he’s wife’s friends cannot see him and good girl becomes invincible. Like all the deeply concerned Facebookers, the couple joins the SAVE ESTHER TARA FROM MARYANNE HELLON CULT.

So there you have it. Coincidence like you’ve never seen. Season III is set to be released this summer. The show just began!