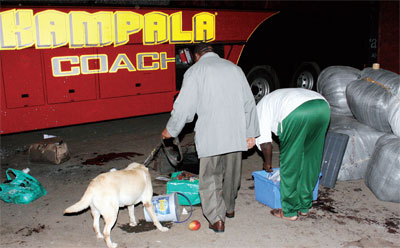 One of those that died was one of the people carrying the explosives onto the bus. As the story goes, three men tried to sneak-force their way onto the bus with a box. They refused to be submitted to a security check. One thing led to another(i.e. details differ at this point) but the bomb went off before everybody had boarded. The 30 or so who were already on the bus were unharmed. The others, not so much. Among that crowd was a friend of DR and fellow Kenyan blogger, Kellie. Prayers for a speedy recovery go out to her and everybody else. One of the bombers perished instantly, one was injured, the other fled the scene almost instantly.

The reasons for the bombings are vague and yet still quite simple. Supposedly, Uganda is being targeted because they provided military support to the AU Somali peacekeeping crew, AMISON. Al-Shabaab has sworn revenge for this and since bombed Uganda several times.

Now, what really bothered me about this whole story is the same thing that bothers me about every bombing story of the past few years. BEFORE the blast happened, authorities on both ends had been warned by Al-Qaeda, Al-Shabaab and the ADF, that there would be bombings – plural. These warnings made it all the way to the Ugandan Chief of Police and no measures were taken; no warnings, nothing. Just intentions. In fact, were it not for the surprisingly alert Kampala Coach staff, things would’ve gone exponentially awry.

The obvious question here is ‘Why?’ Why, given the July bombings that killed so many would anyone NOT take an Al-Shabaab threat as an immediate cause for concern? Unless I’m mistaken, those attacks were also preceded by a warning. But how, with fresh wounds, does a Ugandan Police Commissioner, in good conscience say: “Security forces would issue an alert for vigilance” when asked what he did about the warnings? So your people were vigilant before? How does the Kenyan Police Chief say “It’s too early to tell if these bombings were related to acts of terrorism?” Is there such a thing as a non-terrorist bombing that injures and kills people intentionally?

Dear local authorities, behave. Take these warnings and threats from Al-Shabaab more seriously. React to them less dismissively. As a country, we could not be any closer to Somalia. As a region, we could not be any more vulnerable as their people are our people. Let’s try and be ‘vigilant’ now, shall we?

My second problem with this whole saga is how quick we – Kenyans especially – were to begin spewing anti-Somali slur. Stop it. Grow up. Behave. Ignorance my be bliss to you, but it pisses off the people who can bring this to an end. Besides, who does your hate really help? Frankly speaking, nobody. Negativity is corrosively toxic; it’s also the resolve of the defeated. We can do more working together than we can fighting each other. Think before you speak.

However you approach this, this is really something that should not be allowed to happen, but that we are also immensely ill-prepared for. Let’s pray for peace – in Kenya, Uganda and especially Somalia – and work towards it.

4 thoughts on “Was The Bus Bombing Avoidable?”