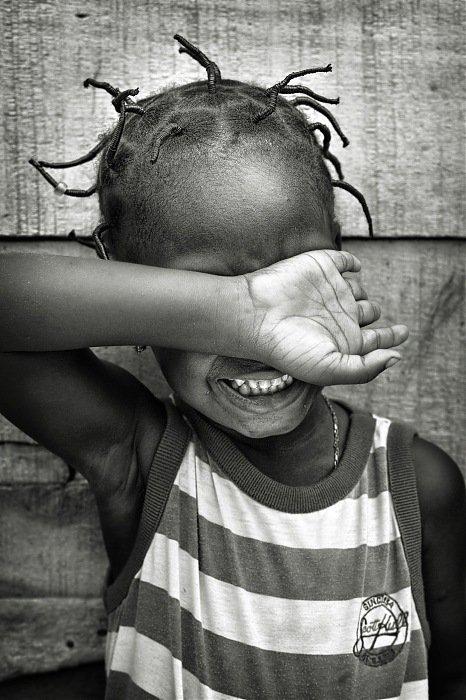 Other than the time you held that International Conference for African First Ladies in Los Angeles two years ago and invited Paris Hilton, very little is known about your organization. As Africans, we know of our individual First Ladies. It is either their eccentricities, extravagance or total lack of decorum that reminds us of their continued presence. And so it seems that the impact that our First Ladies have made and continue to make within their respective borders has long been outweighed by their inaction, indifference and indiscretions well captured in the media.

The bottom line is: you have failed us. Although your primary focus as an Organisation has been on HIV/AIDS, the impact you have made in raising awareness and dealing with this epidemic is very debatable.

If you squint, it looks like a huge muppet is climbing up her back..,

It is high time you re-focused and re-strategized your objectives and agenda seeing as you are an entity that represents the most powerful women in Africa. The underestimated form of female power vested in First Ladies can be better utilized to lobby and trigger a wide range of social and institutional changes in their respective countries. Over and above that, HIV/AIDS shouldn’t be the only thing on OAFLA’s plate. Look around you, there are a multitude of issues facing the African continent that require your consideration and involvement: look at the gross human rights abuses including gender-based violence in DR Congo, illegal human trafficking in North and West Africa, Child labour and exploitation in sub-saharan Africa, and ofcourse the on-going discourses on gender equality, women’s reproductive rights, female genital mutilation and domestic violence.

As Kenyans and indeed Africans, we expected and still expect more out of you as First Ladies. You are after all “the power behind the throne” as a renowned gender scholar once put it. You occupy a very influential position as the spouses of the most powerful individuals in all our diverse lands. If there’s anyone better placed and better suited to twist the arms and mold the minds of our Heads of State for the good of the people, it’s the lot of you. Yet, you only exploit this position of power to pamper and enrich yourselves at our expense. You prefer to sit back and enjoy life in the lap of luxury instead of rising up to the task of not simply mothering our nations but also steering our countries forward and speaking up for the oppressed and down-trodden.

We all know the instrumental roles you ladies have played and continue to play in the political lives of your husbands, we know that you are privy to State secrets and other inside information that you could use to help or destroy our countries and we also know that there are many times that your husbands have turned to you to ask for advice on State matters. These may seem like mere assumptions but this is, after all, the nature of any marital institution, especially when you’re married to powerful men. Even if your husbands do not involve you in any important matters of State, you see and hear things in those corridors of power but you chose to remain ignorant and passive. For those of you that are literate, you see your job as merely to manage the vast personal assets and largess your husband acquires during his stay in office while spending as much of the State’s resources as you can while in power.

As First Ladies, although we didn’t elect you, we’re stuck with you and you have a responsibility to us all by virtue of the position you occupy in the hearts and minds of your husband and your people.

Ideally your aim, as a Pan- African Organization, ought to be transforming yourselves into a vibrant and vocal pressure group in all matters even those with a political dimension. It is my hope and indeed our hope as Africans, that our First Ladies will assume their rightful place in the political, social and economic leadership of our continent. Take for example the on-going stand-off in Cote d’Ivoire, it would have been largely beneficial to have the Organization of First Ladies having its own simultaneous bilateral and multilateral mediations with Simone Gbagbo (Laurent’s wife) and Dominique Ouattara (Alassane’s wife) in order to get them to cajole their respective husbands to go to the negotiating table instead of dragging a whole country down because of a squabble between two men.

In summation, the words of a famous First Lady named Eleanor Roosevelt ought to inspire your work both as an Organisation and also as individual First Ladies in your respective countries: “In the long run, we shape our lives, and we shape ourselves. The process never ends until we die. And the choices we make are ultimately our own responsibility.”

By forming OAFLA, you have made a clear choice that you want to make a difference in Africa, your challenge and your responsibility is live up to that choice and actively play your role as the most powerful and influential female leaders of Africa.

Yours sincerely,
NV (yes, that NV)

9 thoughts on “First Ladies of Africa, You Have Failed Us!”