“When thousands of peoples is riled up to see you
That can arouse ya ego, we got mouths to feed so
Gotta stay true to who you are and where you came from
Coz at the top will be the same place you hang from
No matter how big you can ever be
For whatever fee or publicity, never lose your integrity”

Long hours on the campaign trail, packed and charged rallies, meetings with campaign donors, countless election strategies and counter strategies all culminating in the announcement of the win and the swearing in ceremony. It’s all usually glamorous and inspiring to most people looking in from the outside. Although the campaign period is extremely stressful and draining on the candidate the really hard work begins once that candidate is sworn into office.

Just ask Barack Obama. After his ‘landslide’ win he embarked on achieving some of his campaign promises and he was successful in some most notably healthcare and Wall street reform. However, there is the big issue that has dominated news in the States these last 6 months (not Osama) have been the budget deficit. Make no mistake, the U.S debt is a serious global issue. While the risk of the U.S defaulting on its debt may be a bit farfetched, given the close linked global economy, it is crucial that they sort out their debt issue. As most economists will confirm the two ways to cut a deficit are either reduce spending or increase taxes. However, both options are politically risky for any American president. (There’s also the increased tax receipts/collections option as a result of economic growth but this is more long term in most cases and highly dependent on economic growth).

Tax increases are anathema to most Americans, even the multi-millionaires who face a fairly low effective tax rate compared to other nations globally. On to the other option: the ‘reduce spending team’ seems to have a fairly large and vocal following of mainly fiscal conservatives and moderates. However, most liberals are loathe to see drastic cuts on various federal entitlement programmes, conservative politicians too with their eye on the significant elderly vote are keen to ensure that there are no drastic cuts on Social Security and Medicare that would affect that portion of the vote come 2012. So Obama needs to cut the deficit but also needs those votes in 2012.
Damned if you do, damned if you don’t…

Meanwhile across the pond, Bank of England Governor Mervyn King reportedly said (at a private function before last year’s election ) that the winner of that poll would have to make such huge and drastic budget cuts that they would then be out of power for a generation due to the pain they would inflict on the public. David Cameron and Nick Clegg won that election and so far their coalition has undertaken huge budget cuts which are still ongoing yet it remains to be seen whether King’s prediction will come to pass. 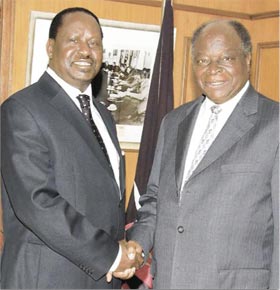 Here at home the two principals are facing some serious supply shocks that have led to increased costs of living. In the short term, there’s not a lot the government can do about increased global prices of crude oil, wheat, maize and other commodities. In the long term, however, policies can be implemented to improve local efficiency and create alternatives that leave us less susceptible to global price increments. But the fact of the matter is that Kenyans want the prices to go down NOW and since the elections are next year the politicians will need the prices to go down SOON.
The government recently reduced the taxes on a few essential goods, that is one of the options left to them to deal with the increased prices. Other options would involve providing subsidies to manufacturers of those key commodities or even providing direct cash transfers to the lower-end consumers. The thing that all these options have in common is that they will reduce government revenue either by increasing government spending or reducing taxes. At a time when Kenya’s debt is at 51% of our GDP increasing the deficit on non-development expenditure may not be the best thing for our finances in the long term.

Kenya’s neighbours have been facing the same problems with Ugandans taking to the streets to protest against the increased food and fuel prices. The response of the government has been interestingly typified by the Minister of Information who while stating that the government would not intervene in the increased costs of food situation said:
“the primary responsibility of feeding a family rests with the head of the family not the government.” 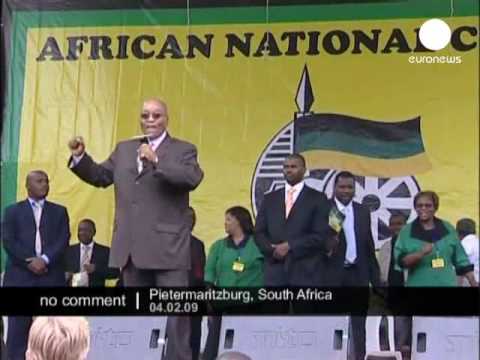 Jacob Zuma’s also having some issues in South Africa. Despite the large economy (relative to competing African ones) the poverty rate in South Africa remains too high for it to be considered a fully developed country. Ironically the bulk of Zuma’s support comes from the lower income earners and they had hoped that his government would be more pro-poor than the previous one. However, what has followed are the perennial battles between the trade unions and the Ministry of Finance (and South African Reserve Bank – SARB). The unions have always been in favour of a looser monetary policy but the Finance ministry has always been keen to guard against any policies that may weaken the economy while the SARB tries to keep to its inflation targeting model. All this leaves Zuma in a bind – he cannot do anything to frighten investors but at the same time he has to stay true to his support base. The rest of the BRICS nations have similar problems. The poverty levels in Brazil, India and China are still too high for their GDP per capita to compete with the West and they thus face the Zuma problem of finding a way to eradicate poverty while finding ways to attract and retain local and foreign investors. It’s unfortunate that more often than not those two goals require policies that are polar opposites.

Who would want to be President under such conditions?

The sad thing about all this is that these economic problems are almost always already existent on or around election time: be it huge budget deficits or extreme poverty or susceptibility to supply shocks but the intense competition for votes means that campaign slogans like “universal education”, or “universal healthcare”, or “income grants for the poor” or “reduced taxes” all too often drown out messages like belt tightening or government cuts. Ideally a mixture of both schools of thoughts, e.g. ‘lets give free education but the cost of that will either be increased taxes or reduced spending elsewhere’, would be a winning formula but the highly competitive campaign trail usually results in all the focus falling on the sweet promises rather than explanations on some of the pain. The end result: an overly optimistic and expectant public electing their man/or woman followed by the morning-after-effect a few months after the swearing in ceremony when their man/or woman starts explaining that change most times comes very slowly and often brings with it certain costs…