I’ve been saving for a few years to go to Brazil for the World Cup next year.

But I changed my mind when I read this the other day: 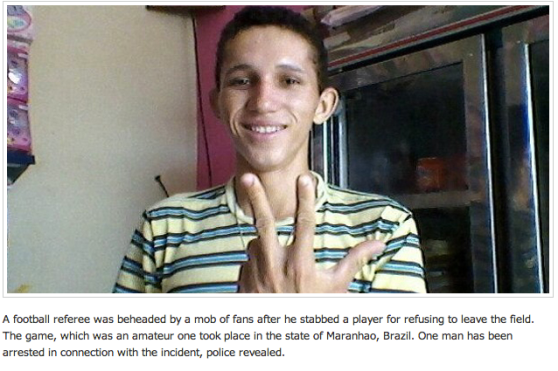 Let’s go through all the levels of insanity here. The referee stabbed a player? Really? That’s a thing now?

I’m wondering how bad do football games get that refs have to walk around with shanks? END_OF_DOCUMENT_TOKEN_TO_BE_REPLACED

Last night, as with all nights, I was tuned to BBC radio. There was a feature on Cyberbullying spurred by the suicide of a 15-year old girl from Canada. It was a tragic story given that only five weeks ago, the girl had “uploaded a video to YouTube describing years of bullying that she said drove her to drugs and alcohol.” Her cry for help was misjudged as a pathetic search for attention. Clearly, no one bothered: The bullying continued and she eventually took her own life.

I pondered on the story while listening to various experts views on why cyberbullying occurs and what can be done to prevent it. While their views were insightful, I found it disconcerting that they seemed to focus on Cyberbullying among children.

Those who have been using social media for quite a while know very well that Cyberbullying is a reality among adults. As the number of social media users in Kenya increases, certain issues arise regarding the use of various sites. Concerns have been raised over Hate Speech, Incitement as well as Ethnic and Religious Targeting. But few of us are talking about Cyberbullying.

As the country’s SM user crowd grows there are those who seek to stand out and make a name for themselves whichever way they can. Some, more so the tech savvy, will result to Cyberbullying.

This was my experience in the last 24hrs:- END_OF_DOCUMENT_TOKEN_TO_BE_REPLACED

Ezekiel Kemboi won our lovely country its first gold medal in the London 2012 Olympics. It was an ecstatic moment, not just for all Kenyans but for Kemboi himself. Certainly, no one foresaw the celebration that would follow Kemboi’s victory. Some have called it an embarrassing show of bromance.., which can be forgiven given that Kenyans were really praying to register their first gold medal at the games. Kemboi delivered.., not just the gold, but a show as well. 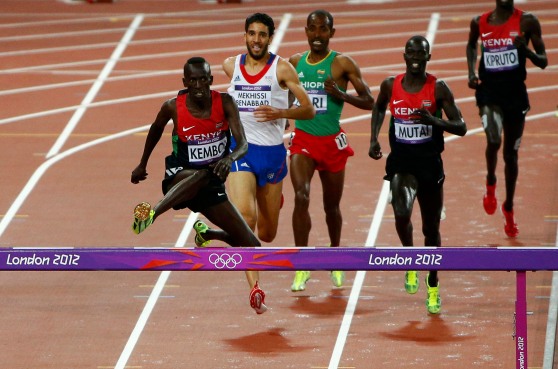 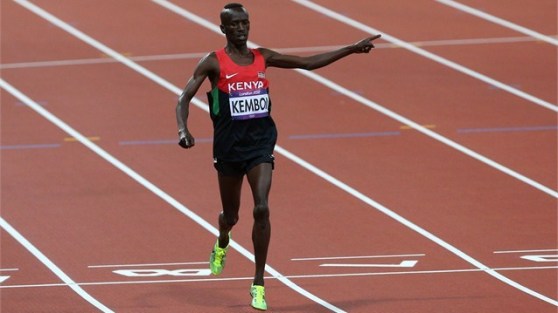 Play dead.., to confuse your enemies. 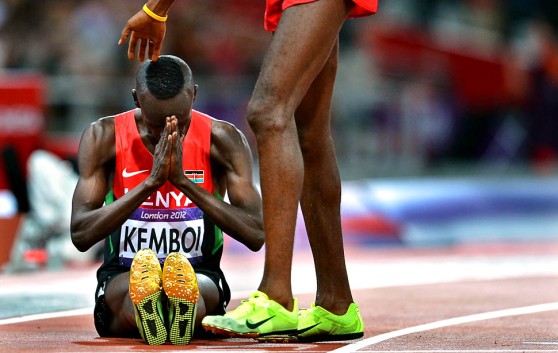 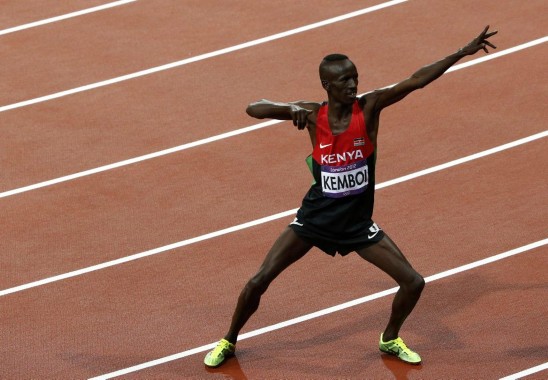 Get up and do the dance of your people 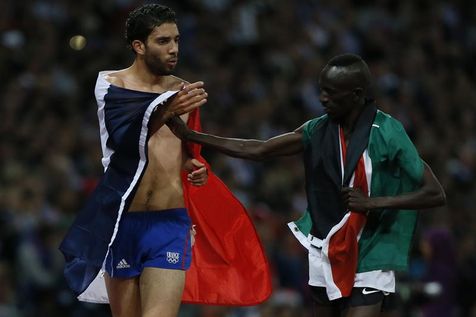 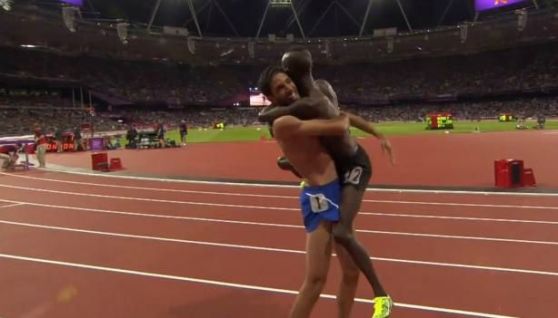 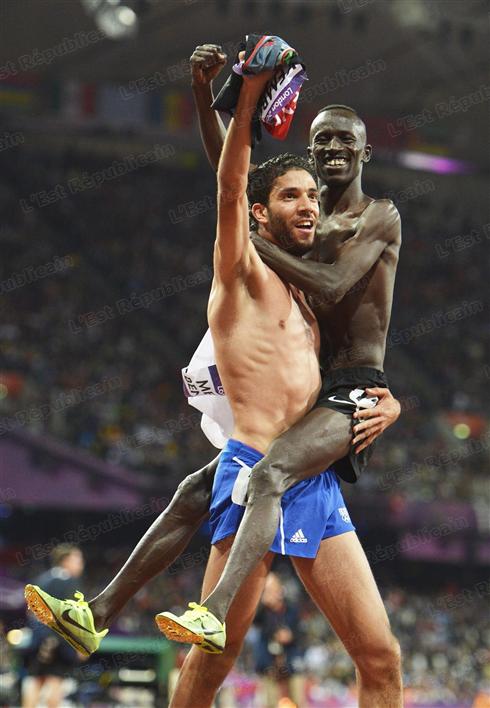 Give the French guy your shirt and let him swing it in the air.., like you just don’t care! 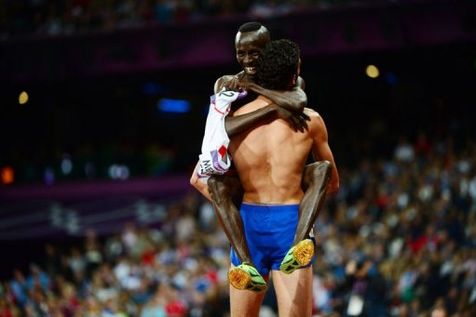 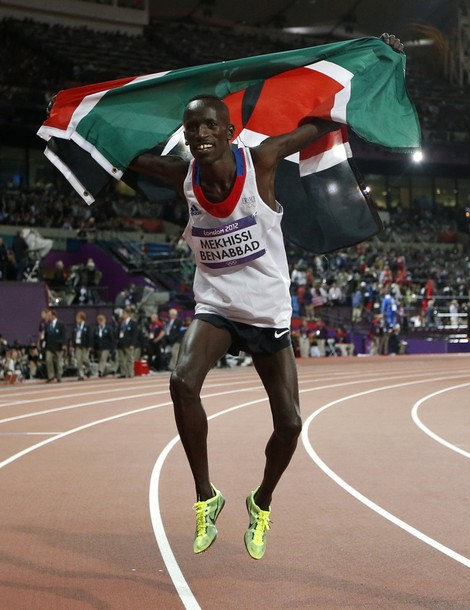 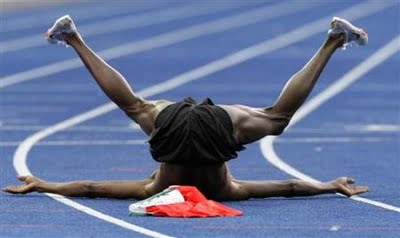 You can always air out stuff.

So Alex wrote a letter on his Facebook wall justifying his decision to nominate El Presidente for eviction from the Big Brother house. I don’t know how much trouble Alex is having walking the streets of Nairobi seeing that we didn’t even care…, thaaat much. I know I didn’t. I don’t even know his 2nd name. But his letter more so the effort put into writing it, just put a bad taste in my mouth.  And seeing that it was addressed to the country (that should include the people of West Pokot) then it’s only fair I reply. Coz no one likes to send a message and not get a response.

Thank you for your letter. At least, it proves you actually give a rat’s ass what the world thinks of you. While you attempt to locate the middle finger on your hands,  let me applaud you on your effort in being a patriotic Kenyan.

Indeed our flag is a beautiful and unique thing. For you to have it on your fireplace, in your bedroom and on all your cars, must mean you eat, sleep and dream thinking of nothing but this country. I’m sure you forgot to tell us about all the Kenya t-shirts and scarfs you have. But don’t worry, we figured that out.

By the way, having the flag in your bedroom.., very kinky. If you never get laid with that flag there, that chic is simply unpatriotic, a traitor and certainly not a nationalist. Thank you also for reminding us that having a flag on our cars is not a privilege reserved for our president and minsters. I hope that every patriotic citizen of this country who owns a car will eventually put a flag on it.

Then there’s that little issue about not knowing the words of our national anthem. Man, I bet that was hard. It’s like going to heaven and realizing that you don’t know the words to the Lord’s Prayer. And God would be looking at you, tapping his foot, stroking his beard and thinking.., should I evict this guy?

So the question keeps arising why you  nominated your countryman for eviction. Actually Alex, the question arises among the people you call “friends” on Facebook. We who did not know you and may never meet you, forgot all about it when your kinsman survived eviction and YOU came back home. 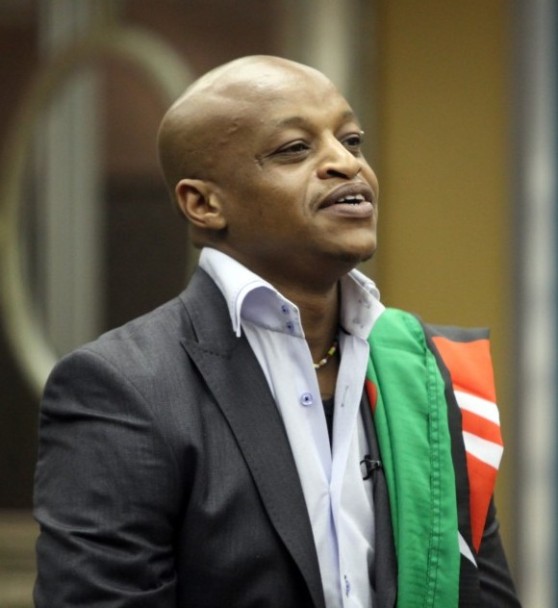 You claim that your fellow Kenyan violated your personal interests and freedom of association. Biggie should really have a human right’s body on location to look into such grave accusations.

In defending your actions, you also claim that “the right of an individual legally executed comes before patriotism, because whoever violates your rights is unpatriotic in the first place.” To this I ask, does revenge include your definition of patriotism?

But of course you would say that you have “legally executed freedom” (whatever that means), protected by the new constitution, which like the Kenyan flag, you love very much. You’ve got so much love bwoy. Love for everything.., maybe just not everyone.., at everytime.

So your countryman came across as selfish, hiding luxury items from other housemates including you. While you make a shoddy attempt at displaying your legal prowess, you may need a lesson in the economics of needs and wants. Luxuries tend to fall in the latter and lacking them does not cause death.

Sure Alex we respect you, as you respect us. We do not expect you to act on every one of our wishes. If you do, you will be unhappy and the last thing we need is another depressed, suicidal Kenyan. We also support your appeal for “peace to prevail”. For real dude. We cannot have another spate of post-poll violence. Never again.

Besides, BBA is only a game.You had the right to play the game as you wished. It’s you who got into the house. Not us. While there, you had the right to offend others and defend yourself as you pleased. Writing illogical statements later defending your actions is rather lame.

So people think you’re an asshole, others think you’re a failed strategist. Who cares? You may not make the best brand ambassador, but you got your shot. That’s all that matters. You were in a game. If only you looked at it that way from the very beginning, you’d move on with your life now. If not for yourself, for the love of your country.

Me.., I just hope you find your middle-finger dude. 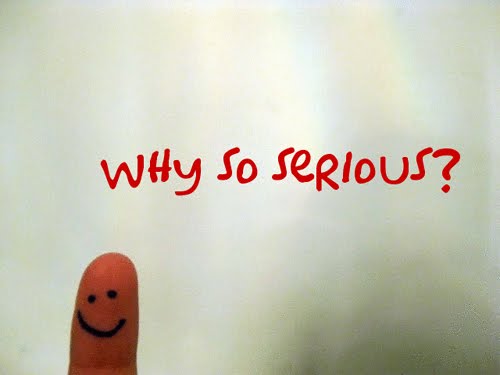 Kenyan sports fans have really spent the bulk of this weekend balancing on the edges of their seats. 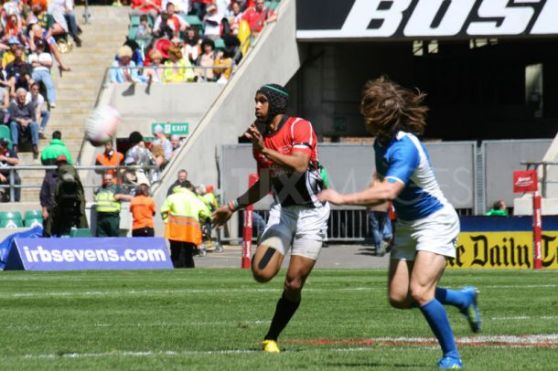 Binti, one of my closer friends is among these. Aside from being one of the hugest Kenya Rugby fans that ever was or will be, she happens to be a Manchester United fan. So on Saturday, she was frantic and on edge as the Kenyan Rugby 7s Team kicked off a fairly important game against Russia. They were winning up until the last minute. In fact, as the clock hit 0, they had the win. All they had to do was stop game play. And somehow in that last play, they lost. Binti slammed tables and screamed frantically, emotions I shared with her fully.

The only other way for them to make a difference was to beat New Zealand AND Argentina. The former game was already written off as impossible; the Kiwis are beasts. And true to that, they spanked us merciless. But with the Argentine Pumas there was a chance. Again, that chance was squandered in yet another “so close” moment.

One can’t help but watch our local sportsmen – bar runners – and feel like maybe, just maybe, with a little more push and support, they’d be game changers. END_OF_DOCUMENT_TOKEN_TO_BE_REPLACED 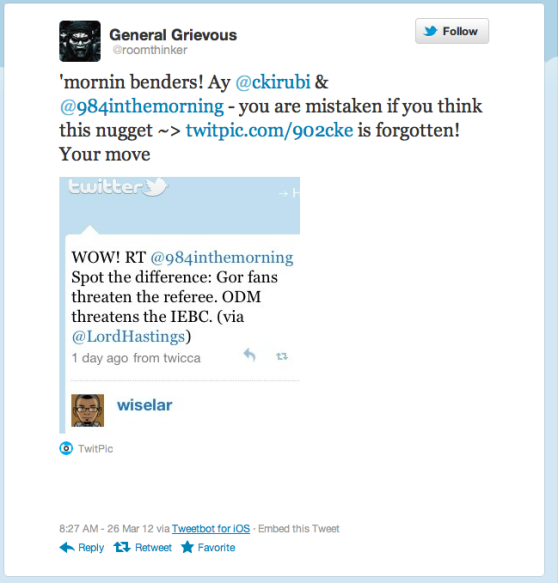 Editor: The following letter is from @BintiM, a close friend of the blog. It voices an opinion shared by many on the reckless abuse of social media by the Capital in the Morning crew. It’s a good thing she wrote it because she’s a lot nicer than I am; and a lot of the complaints we’ve heard about it were a lot more incendiary. But an issue like this does require a calm voice, lest it get blown out of proportion.

I write this letter to express my strong disapproval and disappointment with one of your Twitter accounts @984inthemorning. END_OF_DOCUMENT_TOKEN_TO_BE_REPLACED