I don’t know why this story has affected me so much. I suppose it’s because I feel like it happened while I watched. It started this morning with a tweet from an old school pal. I didn’t think that much about it. I was just glad that Twitter was being used for good. Lately, the Kenyan online community has gained mass, and the world is noticing. We’ve had several worldwide trends, and YouTube even gave us our own page! But too often, Kenyan Twitter Trends [or TTs] are used for malice, jokes, and mischief. So it was nice to see us RTing for good. 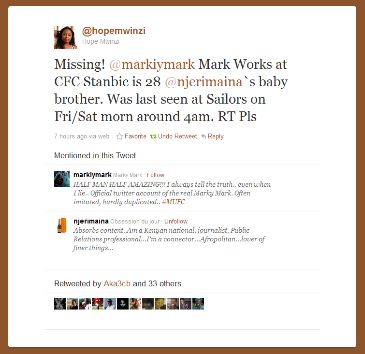 Throughout the day, there were updates and more RTs, punctuated by a silly Twitter beef. A group was formed on Facebook and the search continued. Life went on pretty much as usual, and I hoped this little boy would be found. Yes, I know he was 28 years old, but he was @njerimaina’s kid brother, and he was somebody’s son.

About an hour ago, the TT changed. It suddenly read #RIPMarkMuturi. END_OF_DOCUMENT_TOKEN_TO_BE_REPLACED