What I am about to tell you, I would never tell anyone else. Yet I trust Diasporadicalists. You are the least judgemental people I know. I am confident that none of you will use what am about to tell you against me. I know my confession is in safe hands. Okay, deep breaths everyone. Here goes:

When people ask me what democracy is, I still reply with a definition my primary-six civics teacher scribbled on the blackboard. That is:

That’s all I know democracy to be.

When I read about Teodoro Nguema Obiang Mangue’s super-secret, super-expensive, super-yacht project, code-named ‘Zen’, the first thing that ran through my mind was that the dude must be a closet American. Supersizing is the American’s forte, is it not? I’ve heard whispers about our leaders and their families and friends owning streets in Luxembourg, ranches in Texas, hotels in Paris—the whole kit and caboodle. Yet that yacht catapulted Teodoro into a completely different ballpark.  It is going to be a while before anyone tries to beat that.

Now that we’ve finally come round to accepting that there is, in fact, such a thing as a self-made African man, there’s just one more thing with which we need to reconcile ourselves, apparently. This one more thing being, of course, that we are ‘not yet ready for democracy’.

We—the sub-Saharan, black-African lot of us—may perchance not even be destined to enjoy democracy. It might not be in our cards. That if we can’t, at the very least, find ‘benevolent dictators’, like the ones in Asia, say, we should do the smart thing and move on. 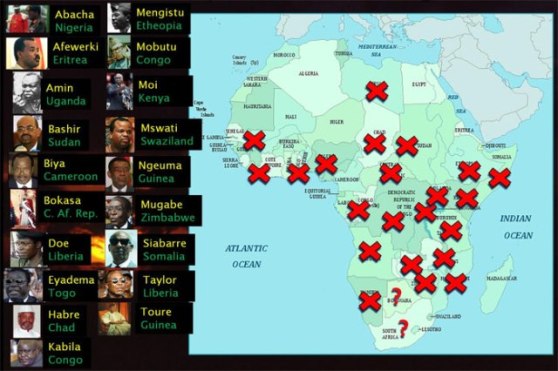 Move on to what, though? Where does one go after a dictator? How to let go of a mental lifestyle that’s been seeded by a lifetime’s worth of democracy-talk? We are the generation that’s been weaned on talk that a country has to be at a certain point on the development chart before its peeps can even begin to comprehend democracy, much less enjoy its fruits. The country shouldn’t have so many freaking poor people, for starters, because you just can’t trust poor people. They never ask for much. A litre of paraffin and some cooking oil is fine, really. We have spent half our lives listening to life-presidents perpetuating the idea that, while we might never be ready for democracy, we are always ready for dictators. It would appear that we have a proclivity for despotism. That’s our lot.

Sometimes, I catch myself thinking that, yes, democracy is overrated, and that we really should move on now. As long as we have hospitals, schools, and no brain drain. Maybe what we really need is better dictators. Perhaps what we need is the sort of dictator who will deal us the Queen of hearts, at the worst.

Perhaps we can compromise.

Instead of ‘eating’ 90 million dollars in one go, these dictators will siphon off little, over a much longer period so it won’t immediately be obvious what they are up to. These are the dictators we need.

If you’re a good dictator and you’re reading this, therefore, do get in touch. We need you.